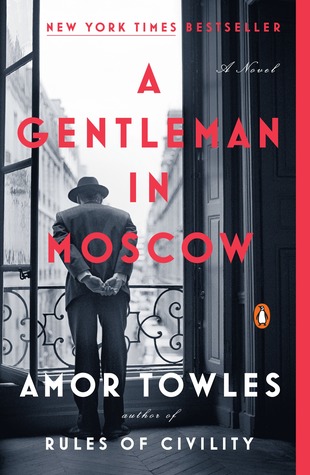 Please join an afternoon book group in the library.

January's pick: A Gentleman in Moscow by Amor Towles

In his remarkable first novel, Towles etched 1930s New York in crystalline relief. Though set a world away in Moscow over the course of three decades, his latest polished literary foray into a bygone era is just as impressive. Sentenced as an incorrigible aristocrat in 1922 by the Bolsheviks to a life of house arrest in a  grand Moscow hotel, Count Alexander Ilyich Rostov is spared the firing squad on the basis of a  revolutionary poem he penned as an idealistic youth. Condemned, instead, to live his life confined to the indoor parameters of Metropol Hotel, he eschews bitterness in  favor of “committing himself to practicalities.” As he carves out a  new existence for himself in his shabby attic room and within the magnificent walls of the hotel-at-large, his conduct, his resolve, and his commitment to his home and to the hotel guests and staff together form a triumph of the human spirit. As Moscow undergoes vast political changes and countless social upheavals, Rostov remains, implacably and unceasingly, a gentleman. Towles presents an imaginative and unforgettable historical portrait. -- Flanagan, Margaret (Reviewed on 07/01/2016) (Booklist, vol112, number 21, p41)

*Sponsored by the Friends of Walker Memorial Library*